Three changes to the game I propose to retroactively always have been that way (since the introduction of the concept that causes them to exist):

Color indicators should not be just colored circles, but instead or additionally make use of the color symbols. This serves two purposes.

On the one hand this is much more friendly to the colorblind. Frames are more or less discernible for the colorblind (you won't mix up white and black), but an indicator that uses a means other than color to convey that information would be very useful.

On the other hand it solves the devoid issue. Devoid was made a keyword because they couldn't find a meaningful way to represent colorlessness with a color indicator. But just one set after devoid's introduction they introduce a colorless mana symbol that everyone gets. If color indicators used the same symbols as mana symbols, you get to introduce the colorless symbol sneakily one set early - and have an argument to immediately change the cards adding colorless mana without having to errata them by the second set of the block without actually revealing your plan to introduce colorless mana costs.

The color of Phyrexian mana is kinda hard to distinguish without the ability to see color. Like color indicators they eschew one of the most accessible ways we represent and recognize color: sun, drop, skull, flame, tree - the symbolic encoding of the colors used in mana symbols.

One might argue that you cannot simply use a colored mana symbol since you also want to use the Phyrexian symbol in your symbol for thematic reasons. Fortunately we already do that every now and then with hybrid mana symbols. I hence introduce: Phybrid mana. 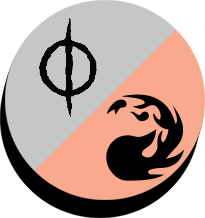 Remember how I removed the need for devoid to exist with the first change? Well, now that the word is no longer used as a keyword ability it may still be of use (after all some cards still might want to refer to it for compatibility with Eldrazi explicitly over e. g. artifacts and lands which are also colorless but not devoid).

This is a functional change since previously only cards now using a colorless indicator would be devoid. This change though groups (some) Eldrazi with colorless identity and (some) with colored identity together - which one might actually consider preferable. I wouldn't at all be against now allowing the single devoid legendary creature to helm a Commander deck with any devoid creature in it (the colorless Eldrazi that are not devoid get in anyway).

Updated on 23 Aug 2019 by SecretInfiltrator