R
Creature – Human Barbarian
Trample
Raiding Horde’s power and toughness are each equal to the number of creatures your team controls plus the number of lands your team controls.
The thunder of thousands of hooves heralds a storm that will tear apart armies and reduce kingdoms to rubble.
*/*
4 comments
last 2019-09-10 07:15:07 by SecretInfiltrator
Dwarven Engineer

, Discard a card: Draw a card. 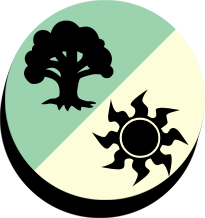 I'm quite certain I make one Card of the Day each day. ;)

What I think you'd really want is "Discard a trap card: Draw a trap card". But doing that without it being either boring-repeatable card-search (and thus not very red, and certainly not common) or online-only is a hard thing. So this is probably a good-enough flavour implementation.

I wish there was a little more difference between the two abilities than just a 1 mana reduction. Something along the lines of "

, discard a card: draw a card. If you discarded a trap card, also do X"

Rather wordy, but very nice design regardless. Quite interesting as a hybrid card.

Wait, why does it specify that attacking and blocking creatures don't deal combat damage this turn? What other entities would be dealing combat damage?

"Prevent all combat damage that would be dealt this turn."

Menace would fit here and could replace intimidate. (In that case) I would reduce the mana cost by

. Also, I think with menace the card could give +2/+2 UEOT instead.

Cool design mechanically as Trap cards generally tend to be by their very nature situational. Also has decent flavor.

agree with Vitenka about wording. I don't super mind about the flying thing, it would be neat, but it's your card... Also it doesn't need to be that specific imo.

Also it makes a lot more sense that an archer would at LEAST hit FIRST, but clear shot makes way more sense to me than the ixalan boi.