Here's the story behind the cards:

Liberia is a new world recently discovered by five different groups, each with an enemy color combination. No group knows about the others, so they will have to meet them at the same time they are getting to know the world and its strange creatures. 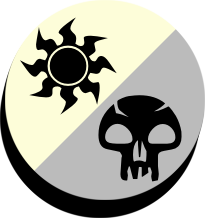 ) A city of humans built it in the middle of some plains, entirely closed to the outside for now. Queen Cecilia governs the city along with her husband Paolo. She wants order in her city no matter what, and is very disciplined. It is common among Forteplazians to talk about her as their only leader. King Paolo has as much power, but he isn't really a public figure, and isn't connected to anything important happening in the city.

Among Forteplaza's army are the ladyhealers, cleric women who help in the middle of the battle. Then there's the regular foot soldiers and knights. In Liberia they have discovered pegasus, which didn't exist where they come from. Cecilia quickly requested a group of elite guards named Moonknights to guard the city's surroundings from the air. Since Cecilia despises selfishness, Forteplaza's army is very organized and impartial. Should a soldier start fighting individually or for his needs only, he will be left behind by the rest, as Cecilia directly dictates. Paolo's niece Florencia, however, has been named a Moonknight, going against the law that prohibits women from fighting.

But there are also some that dislike Cecilia's oppression, tyranny and violence. These rebels want freedom for their people, and are prepared to confront Cecilia's soldiers. In order to expand their belief, they fight criminals at night, then leave them captured but unharmed, teaching people justice doesn't need to be violent. They are led by their leader Matteo, who they call "The Pastor". 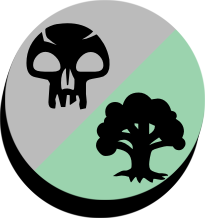 It is not clear where they come from or what happened, but trolls from the Mertinia forest insist their previous world was destroyed because of weapons. This have made them want to live in a more natural area, and explore the magic that appears to come from this mysterious forest.

The ones that live here are the vitterfolk trolls and the jötun giants. Jötuns are less short-sighted than vitterfolk, and sometimes accuse them of working for themselves only, "using" the forest. The vitterfolk, however, think that violence is necessary to survive, and so have formed a group called the Warriors of Nature, led by an old troll called Nilvorg.

Finally, halfbloods are jötun-vitterfolk hybrids, inheriting the jötun's strength and the vitterfolk's ingenuity. There are very few, but a lot of Mertinians belive they are the future of their race. 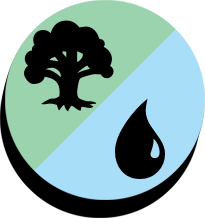 The faeries from Moongrove moved to Liberia because they were in danger. When they reached this forest, they discovered magic native to that place, and so began to explore it.

The Soleils practice Sunguided magic. This magic is all about understanding the land, the living beings, and discovering the inner secrets. These kind of faeries have small wings, making them unable to fly. This magic works better during the daytime.

The Lunes practice Moonguided magic, which is about understanding how life works, and being able to manipulate it. These faeries have pale skin because they only go out at night.

Soleils and Lunes have had different kinds of magic long before they came here. For now, faeries agree that any newly born faerie can learn both kinds of magic, but, at some point, they must choose their path. Princess Icya's time to choose is coming soon, coincidental with the moment she will become the Queen. It is believed that the kind of magic she chooses for herself may decide the future of Moongrove, and give either Soleils or Lunes more power over the other. For now, she seems to like Sunguided magic.

Many rivers connect to the deep lake in front of the mountains. Here is where the mermaids and sirens have landed.

Mermaids like to explore Liberia's seas in search of undiscovered secrets. But they move very slowly. Sirens, in the meantime, explore the surroundings through air, trying to cover as much ground as they can each day.

They defend themselves in different ways, too. In case of encountering dangerous creatures, sirens go in groups, lure them, then attack them. The mermaids, on the other hand, repel dangerous creatures as soon as they seem them, since they aren't good fighters.

Heavenlake is led only by an ambicious siren called Brazeira, who likes to be called a "Queen". 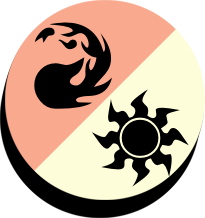 Dwarves come from a poor world. When Liberia was discovered, they were sent to search for treasure. They often dig mines.

Irecliff's dwarves are brave, short-sighted and enraged easily. They also have a thirst for combat they can't fulfill because of their situation. Near Irecliff, there are few creatures, except for big dragons. As much as they like to fight, however, they fit in a community. Their ability to easily call others for help makes up for their size.

There's also the kithkin. But they don't have much importance, and are most of the time treated as "other dwarves". Kithkin are a bit more calm, and some even resent the dwarves. But they aren't really heard.

Brolly is the one in charge of this group of dwarves, being one of the wisest.

So, what's the deal with this world? There are many different creatures. From owls to creepy fish to zombies, and they all appear very sad, frustrated or angered. Each of these is unique and has a mysterious past.

Now that Liberia is joined by five new groups where internal conflicts are present, where there is resentment, selfishness and jealousy, will the story be repeated again?