Is this set specifically more based on any particular Warcraft installment? If 3 is included, then I think the level up mechanic and cards with "Rather than pay ~'s mana cost, you may tap an untapped level 3 Orc creature you control" could be very nice. I remember seeing that in some RPG / warcraft custom set at MTG Salvation.

Also, have you any thoughts as to what are the (main) colors for the decks?

in both seems a bit weird. Considering the "orc only" restriction, a card like Horde Peon could conceivably be 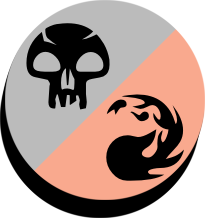 I since have created a front page for this set going into more detail (it has actually been in the process of creation as you posted this and I forgot to submit it before wandering of to other responsibilities).

splashes still don't seem necessary. "Cutting down the trees" is a very anti-

thing to do anyway. The night elves in Warcraft 3 use the forest/trees the "proper"

way, not the Orcish Lumberjack way.

I'm keeping your criticism in mind, btw, as long as a comment remains marked as unadressed I am still planning to get around to the problem.

I'm certainly not in love with the current color distribution, but I find it easier to cut green later than not give it a whirl.

I'm using this set as testing ground for my work with Cockatrice - finally going digital with my playtests. This means also that I'll pick up card creation and refinement.

I have come to appreciate card art for this way of playtesting especially, so that will be added to the list of things to get done sooner rather than later.

> I'm keeping your criticism in mind, btw, as long as a comment remains marked as unadressed I am still planning to get around to the problem.

Cool, though I think that only you, as the creator of the set, do see what comments are unaddressed.

> I have come to appreciate card art for this way of playtesting especially, so that will be added to the list of things to get done sooner rather than later.

Art in the cards is really overlooked area when it comes to design. To most, finding art is a mere afterthought.

For WotC, I think they can often just ask for a certain kind of art from paid artists so they aren't "burdened" by this at all. However, as custom designers, art can be used as a yet another restriction that can inspire the would-be-mechanics of the card.

I also have noticed that some people remember cards better by what are they called where as I recall cards better what their art looks like. So maybe this visual inclination is why I rather (sometimes) do cards with their art selected beforehand.

I am considering to support an (optional) variant format of 60/59+1 card commander with this since I have already some legendaries slotted in.

It has been pointed out to me that the Orc deck during playtesting used an old list that contained almost no instants/sorceries.

The error has been rectified.

Buildings might end up in the decks as dual lands since the mana is a little wonky right now.