The Clockwork Plane. A world made of metal, striving to improve itself.

I had an idea for a world in which clockwork automation had progressed to the point that nothing living in a traditional sense was left. Imagine Esper advanced all the way to their goal of a world made of etherium, or the original Argentum "unpolluted" by Memnarch and later Phyrexia. The entire plane is clockwork; the main purpose in life of the people living there is to create the perfect clock. Since the people are clockwork, they refer to themselves as clocks, so their real goal is to complete (not compleat!) the world's mechanism. Because the beings are artificially made (by "clockmakers," appropriately enough), they shouldn't posses the spark. However, Venser comes across the plane and discovers a clock with the spark. This begs the question of whether the inhabitants are actually living beings. They believe that they are, but most Planeswalkers don't. Venser must now discover the truth, or if it even matters. This story takes place between the Mending and Scars of Mirrodin block.

When I came up with the setting, it was an anti-progress story in the style of Frankenstein, but set in the ironic fittings of Steampunk. While it certainly could be a cautionary tale, that's more appropriate to a different storyline, which I won't go into here. This story is an actual Steampunk story. Unfortunately, I probably won't create a full set, though I can certainly map out a block outline. The mechanical themes of this block seem to already overlap those of my main set, The Oncoming Storm, which implies a separate problem. For now, I'll simply create a smattering of card ideas.

: Put an eon counter on Infinity Clock, then end the turn. Activate only during your upkeep.

, Remove an eon counter from Infinity Clock and return it to your hand: Take an extra turn after this one.
"A clock that merely tells time? You have lots of potential, but your creations lack both form and function."
--Stusur, to Temmar
4 comments
last 2013-02-01 04:59:27 by jmgariepy
Magnetic Field Generator

R
Artifact
Clockwork X (This artifact enters the battlefield with X charge counters on it. Whenever it becomes tapped, remove one at end of turn.)

M
Artifact Creature – Berserker
Whenever Flechette Thrower attacks, gain control of target artifact attached to a creature defending player controls until end of turn and attach it to Flechette Thrower.

Oh yeah. There was probably supposed to be a "your opponents control" in there somewhere. Also, I came nowhere close to finishing this set, so maybe I would've fleshed out that theme more, who's to say

Doesn't really feel like something you'd waste an enchantment slot on casting, though? since there's not really any way to manipulate the cost of things in your library, there's not really any sensible way to turn it towards hurting your opponent more than you? And, well, it's going to hit your most common mana costs most often - which means a lot of planning around just trying to play it. For the cost, it feels like it should be a lot better. Unless the intent is "Build a no-creatures deck", but the cardlist in this set doens't support that in white - you only have two instants and one other enchantment to play.

That wouldn't be breaking the color pie. Sure, the colors would play differently in this specific environment, but for the game as a whole it would do nothing.

It would however give some functional meaning and distinction for the 'everything is artifacts now' factor which will otherwise indeed remain a mere gimmick.

I didn't actually want to break the color pie by letting the colors deal with things they're not supposed to just because they're artifacts now. So I don't want Shatter if I can help it. I tried having more interactions with artifacts that worked with creature and noncreature artifacts in interesting ways. This set was definitely a gimmick set, where I had a cool idea for a world and challenged myself to see how it would turn out.

Borrowing from Nahiri, the Harbinger

What we're missing is that I didn't bother reading Narcolepsy. I assumed you were suggesting Claustrophobia.

Looks like a card that could make sense in vintage or whatever.

I've been thinking about the whole 'all creatures are artifacts' angle, and it doesn't really do anything in the environment except change some words. I guess 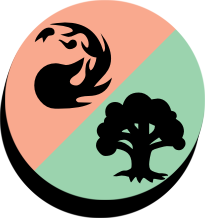 gets creature destruction now and

gets creature recursion / cost reduction, but I can't think of much else. IMO it should have some more interesting takes on it, as in how it would affect the gameplay in a more major way. Otherwise a creature being an artifact is just throwaway gimmick / trinket text.

Like, this card is pretty much a bad Negate now that we think about it, but did it really change anything? It would if it existed outside the set, but in this set it's meaningless in that it just imitates something else.

Maybe there should be some kind of counter balance to this... Like land creatures or something so that all creatures aren't artifacts. How about awaken as a keyword? ... or something such.

I would at least heavily play into how colors traditional work with artifacts, such as the aforementioned

's affinity with them.

Either of us is missing something. The key phrase here is interviewing clause:

Cute. Are there any nonartifact creatures at all?